Information compiled by Kate Goodman, Historian of the town of Alexander 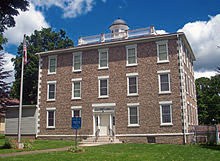 In 1811, The "Alexanderian Library" was formed with the following trustees; Noah North, Ezra W. Osborn, Henry Hawkins,Image Colonel Brainard, Samuel Latham Jr., and Harvey Hawkins. Patrons of the library formed a literacy society in 1828 and began discussing the practicality of establishing a classical school, and in 1835 it was decided that it was needed. A board of trustees was formed with Samuel Benedict Jr., as president and fund raising began. The cobblestone school building was constructed with Hezekiah Barnard as master mason for this three-story building. The building cost $7000.00, of which $6000.00 came from fund raising and $1000.00 in the form of a mortgage, held by Henry Hawkins. This became the Alexander Classical School and opened on June 13th, 1837.

The building easily fit its 250 students, and offered Gentleman’s and Ladies’ departments as well as an elementary branch. Students from beyond the immediate Alexander area boarded with local families to attend. Some of the courses offered then were; Geography, History, Rhetoric, Declamation, Latin, French, and Mathematics. The faculty consisted of five persons: three women and two men. The first Principal/teacher was E.T. Crocked.

The Alexander Classical School’s first few years in education were quite successful, but the enrollment began to decrease and in 1844 the mortgage on the school was foreclosed. Mr. H. Hawkins, the mortgage holder, negotiated with the Presbytery of Genesee County to open a seminary in the cobblestone building and to operate a school therein for 20 years with at least three teachers. The Genesee and Wyoming Seminary opened in 1845 the same year Henry Hawkins died and bequeathed his private library and geological cabinet to the school.

The free school system was gradually established throughout New York State and received greater impetus following the Civil War from the Normal School legislation of 1870 and the Compulsory Education Law of 1874. These helped bring the demise of the private seminaries and academies.

Alexander had thirteen district schools; these were consolidated into nine districts by 1880. In 1886 the cobblestone building became the home of the Union Free School which included in its curriculum three years of high school. Grades 1, 2, 3 occupied one room and grades 4,5,6 occupied an adjoining room on the first floor. Music Class was held in the first floor corridor with students seated in benches against a wall. In 1908 a fire occurred in the boiler room which burned some of the first floor but was luckily stopped in time.

In 1937 the cobblestone building along with the nine district schools and other schools from surrounding towns decided to consolidate which was finally accomplished in 1939 when the new Alexander Central School opened just across Buffalo Street, facing the old cobblestone building which it still does today.